$
134.95
Awe-inspiring one-of-a-kind cufflinks made of authentic & rare coins from the Vatican minted from 1929 to 1941. These scarce coins had very low mintages each year and are hard to find. They feature St. Michael in full glory with an exposed torso, spread wings, and sword in hand. Beautiful works of art but also authentic & historic coins.

An archangel in Jewish, Christian, and Islamic teachings, Michael leads God's armies against Satan's forces in the Book of Revelation, where during the war in heaven he defeats Satan. Christian sanctuaries to Michael appeared in the 4th century, when he was first seen as a healing angel, and then over time as a protector and the leader of the army of God against the forces of evil. By the 6th century devotions to Archangel Michael were widespread both in the Eastern and Western Churches. In Hebrew, Michael means "who is like God". 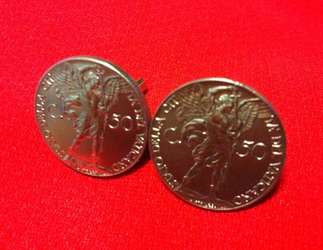 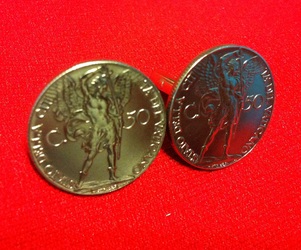 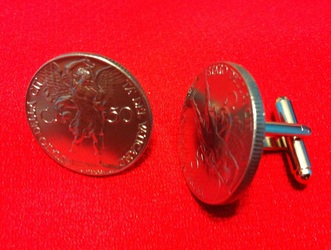 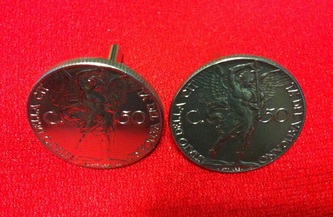 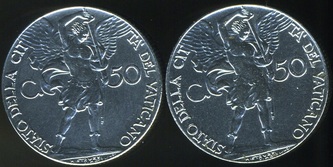 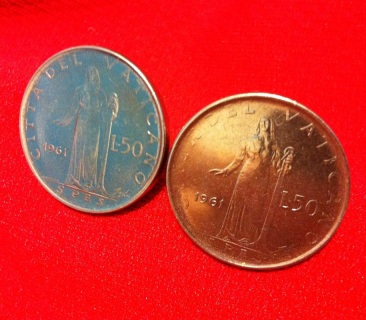 $
44.95
Very beautiful cufflinks made of authentic stainless steel coins from the Vatican. These scarce coins have a low mintage. They feature the ancient Roman goddess of hope holding a large anchor. Multiple temples to Spes are known, and inscriptions indicate that she received private devotion as well as state cult. Large size at 24.8 millimeters in diameter.
Antique 1908-1917 Italian Beauty Aboard Ship 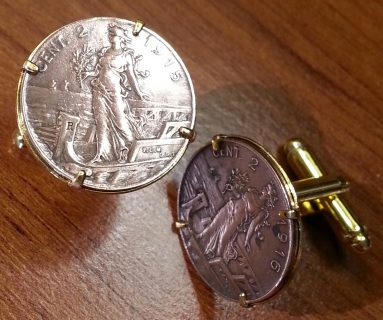 $
39.95
Beautiful cufflinks made of authentic antique bronze coins from Italy. These scarce historic coins were minted between 1908 & 1917! They feature a beautiful woman standing aboard a ship with the denomination and years of mintage above her. Incredible design & detail. So much history behind these! 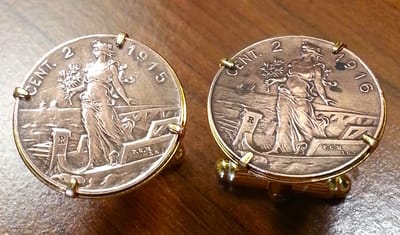 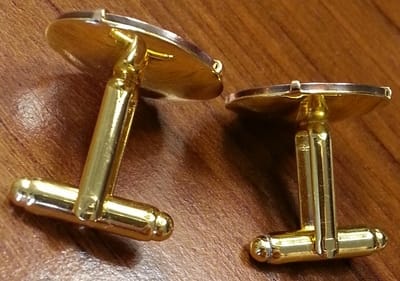 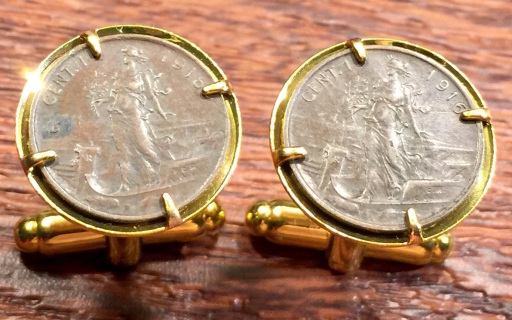 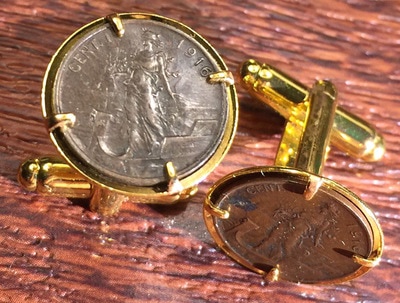 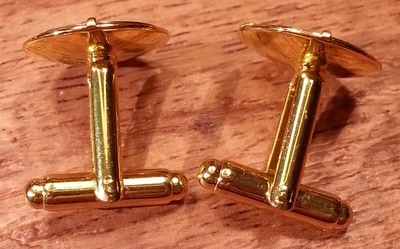 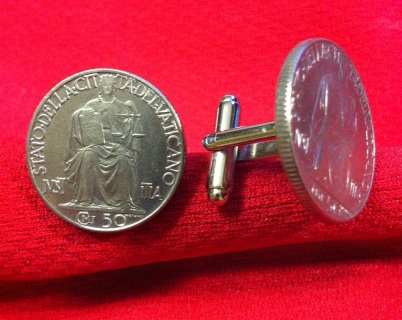 $
39.95
Unique & beautiful one-of-a-kind cufflinks made of authentic vintage coins from Vatican City, Rome. The Vatican minted very few quantities of these coins in the early 1940s. These scarce coins feature justice sitting with tablets of the Law and scale. These would be perfect for a judge, attorney, or just about anyone who appreciates beautiful cufflinks. 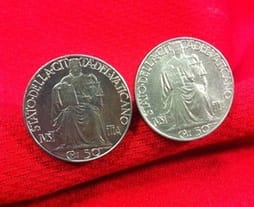 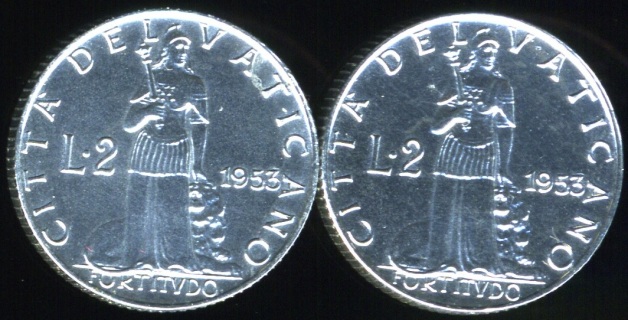 $
34.95
Absolutely amazing cufflinks made of authentic vintage coins from Vatican City, Rome! These coins were minted from 1951 to 1958. They feature Fortitude standing with a lion at her feet! "Fortitude" is written in Latin below. Fortitude is courage, bravery, boldness, fearlessness, mettle or intrepidity. Symbolism: Its accompanying animal is the lion. Often, Fortitude is depicted as having tamed the ferocious lion. It is sometimes seen in the Catholic Church as a depiction of Christ's triumph over sin. It also is a symbol in some cultures as a savior of the people who live in a community with sin and corruption. Years pictured may differ from those received. 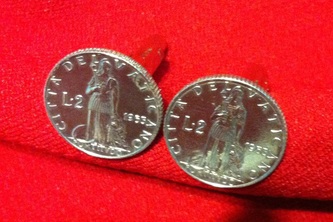 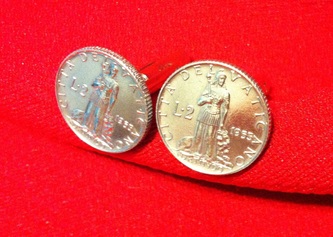 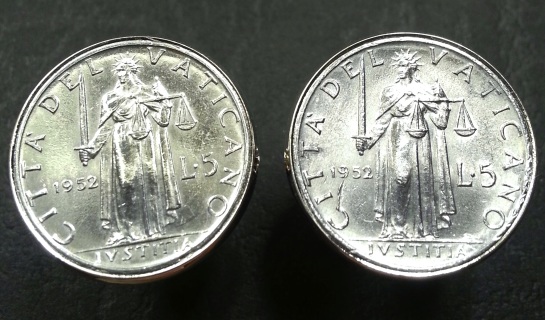 $
39.95
Quite stunning one-of-a-kind cufflinks made of authentic vintage coins from Vatican City, Rome. The Vatican minted very few quantities of these coins in the early 1950s. These scarce coins feature justice standing with sword and scales in hand. These would be perfect for a judge, attorney, or just about anyone who appreciates beautiful cufflinks. Years pictured may differ from those received. 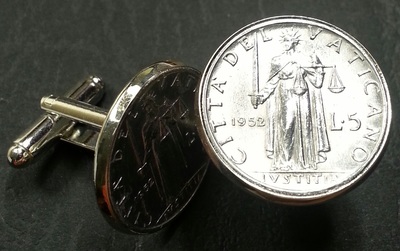 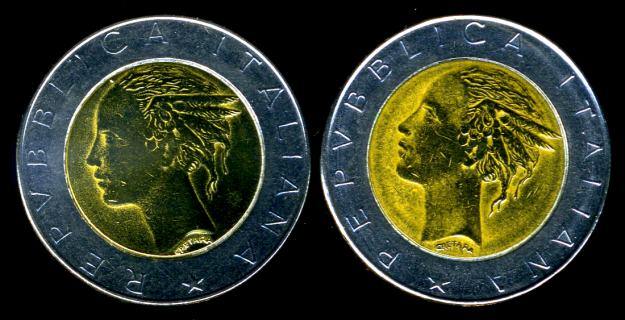 $
19.95
Wonderful cufflinks hand-made of authentic vintage Italian 500 lire coins. Stand out from the crowd with these one-of-a-kind cufflinks! Large & beauteous. 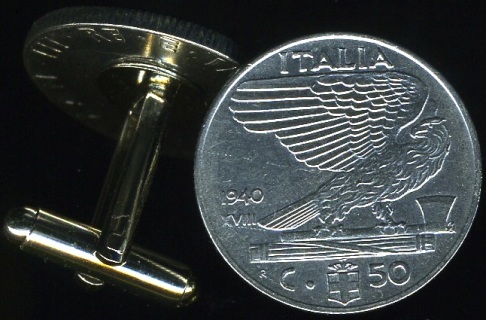 $
24.95
Cufflinks made of authentic antique Italian stainless steel coins both dated 1940. They feature a glorious eagle holding an axe. Perfect match for that stainless steel watch! Cufflinks are 24 mm in diameter. 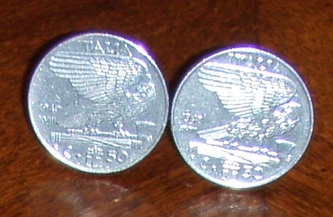 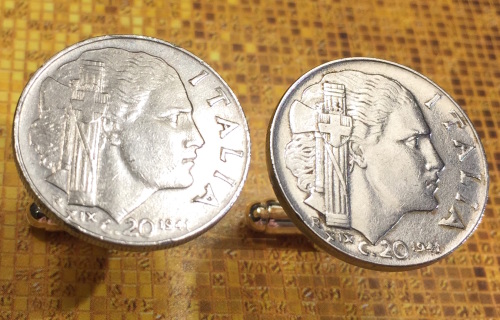 $
19.79
Historic cufflinks made of authentic vintage Italian coins minted which were minted during World War II from 1939 to 1943. The coins are stainless steel & were minted under the reign of Benito Mussolini. The years will be visible on the front. So much history behind these! Years received may differ from those pictured but will be from 1939 to 1943. 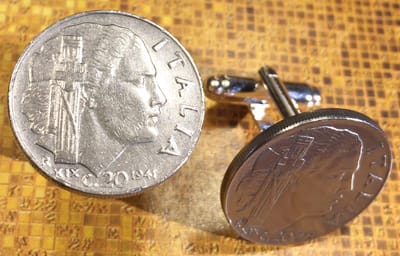 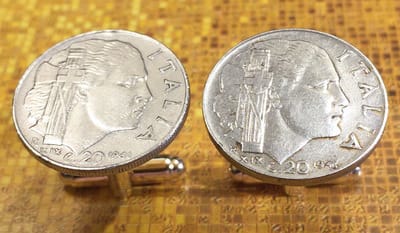 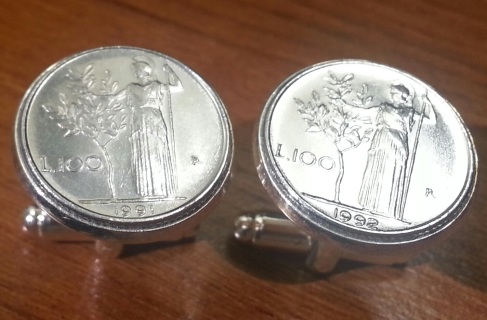 $
18.95
Wonderful cufflinks made of authentic Italian coins featuring the Roman goddess Minerva who is the goddess of wisdom, war, art, schools and commerce. 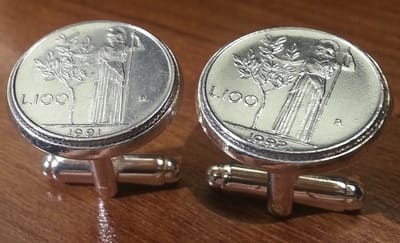